Throughout its 45-year history, the Wat Phra Dhammakaya has never wavered from its mission to create world peace through inner peace by promoting the Buddha’s method of meditation and teachings that have changed the world since 2558 years ago.  The ultimate aim of all activities organized by the temple is to bring peace to the minds of individuals, to the Thai society, and to the world that we all share.

It all started with ‘why’

Ven. Dattajivo, the vice abbot of Wat Phra Dhammakaya, has said: “Before beginning any work, we must first ask ourselves these questions: ‘what,’ ‘how,’ and especially ‘why’”.  Therefore, the founding of the temple 45 years ago began with such questions. The goal was to make the temple a meditation-learning center for monks, novices, and peace-loving people of all ages, nationalities and races.  Back then, the questions were: ‘why is it that the majority of people who come to the temple – any temple – are old people when the Buddha’s teachings are applicable for people of every age and are best learned when they are young?,’ ‘Have people lost interest in temples or have temples ceased to be interesting?,’ and ‘How can we encourage and inspire people to learn Dhamma?’ 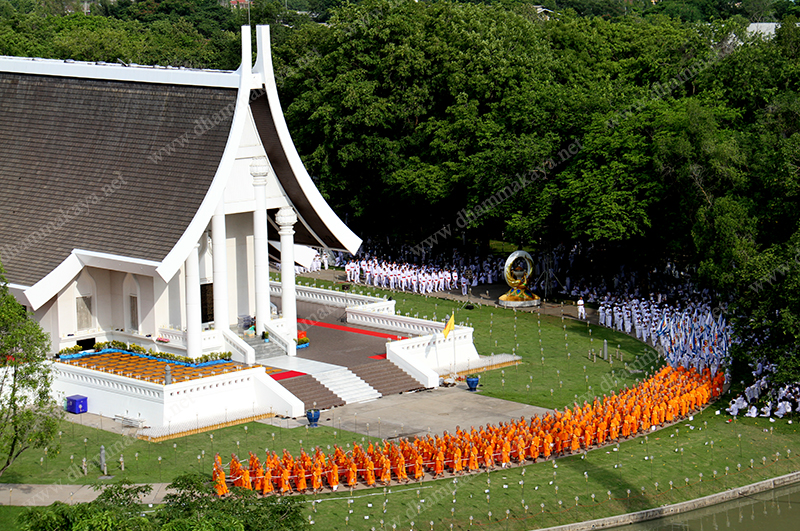 During its first 30 years, Wat Phra Dhammakaya concentrated on building a strong foundation of activities and different projects within the temple.  Later, it expanded the scope of these activities in cooperation with many other Buddhist organizations, nongovernmental organizations, and educational institutions. Among such activities are the mass ordination of 100,000 monks throughout the country, the V-star moral education for youths, the nationwide alms-offering events, and the Dhammachai Dhutaṅga pilgrimage.

Mass Ordination of 100,000 monks throughout Thailand

In order to maintain Buddhism, Buddhist monks have to collaborate to spread Lord Buddha’s teachings. However, in this present time, there are 5,937 deserted temples in Thailand (according to an official record of the National Office of Buddhism, dated 1 June 2009) mainly because fewer people are entering monkhood.  When people spend less than a month in monkhood, they do not have sufficient time to train themselves and to study Dhamma profoundly. As a result, very few people are aware of the true value of ordination. Morever, these days very few employers allow their employees to take a three-month leave of absence to be ordained as monks during the Rains Retreat period.  Hence, there are very few ordainees to propagate Buddhist teachings, resulting in the critical situation of Buddhism in Thailand.

Therefore, in order to produce the new generation of Buddhist monks to become the troop of Buddhism, Wat Phra Dhammakaya held a mass ordination of 7,000 monks from 7,000 villages throughout Thailand in year 2552 B.E. (2009 A.D.) and over 10,000 people were interested in participation. In consequence, Wat Phra Dhammakaya continued to arrange appropriate trainings for the rest of people interested.

And in year 2553 B.E. (2010 A.D.), the mass ordination of 100,000 monks from 70,000 villages started twice a year—one in summer and the other one during the rains-retreat. Every year, there are a lot of people interested to participate in the program and even extend their stay in monkhood and are assigned to different temples in their hometowns, resulting in the decreasing numbers of deserted temples.

“V-star” stands for “virtuous stars”. It is a moral education program for youths, conducted in cooperation with the International Buddhist Society and thousands of schools throughout Thailand with the common goal of cultivating the universal values of cleanliness, tidiness, politeness, punctuality, and mind-purifying meditation in the minds of the youth.

These five values (5 Universal Values of Goodness or 5UG) may appear simple but they have proved to be highly beneficial to the young students themselves as well as their parents, schools and local communities when put into daily practice.  The value of ‘cleanliness,’ for example, goes beyond cleaning things and places to include the use of clean words and having a clean intention. The results of implementing this program have been tremendous. By helping their parents clean and tidy the house, school or temple, dressing politely, thinking through before speaking, being punctual at all times, studying hard, cleansing their minds with daily meditation, and following their heads rather than their impulses, these youths will become the country’s valuable human resources.  In short, they learn to take responsibility for themselves, their families, schools, temples and communities through daily practice of the 5UG.  Instead of looking for someone or something outside themselves to blame, they look for solutions and always start with themselves.

Dhutaṅga is how monks take their disciplinary training to another level for the purpose of ridding themselves of defilements.  Dhutaṅga is about living light so that monks have more time to focus on meditation and observing their minds only. Monks on Dhutaṅga eat only one meal a day, take up residence outdoors, and consume only food that they receive from alms rounds. They keep personal possessions to a bare minimum and typically journey barefoot.

The 1,130 monks on the Dhammachai Dhutaṅga pilgrimage come from different parts of Thailand. Yet, they are united by the mission to train themselves and to spread the message that “inner peace is prerequisite to external peace in any society and the world at large”.  Their peace journey also serves a tribute to honor the Buddha and the late Meditation Master Phramongkolthepmuni who rediscovered the Buddha’s key knowledge about the innate Body of Enlightenment (the Dhammakaya) which had been lost to the world about 500 years after His passing.

Although the annual Dhammachai Dhutaṅga pilgrimage is primarily for monks, many who had the opportunity to witness the group pilgrimage were inspired to learn and to practice the Buddha’s teachings.  It is one thing to know Dhamma from written or spoken words; it’s another to live it.  As the monks walk, they are putting their Dhamma practice to test.  It is obviously easier to meditate or to keep one’s mind still in a cool and quiet environment, and we all should find time to do that. But the fact is most of us live in an ever-expanding urban society and face many challenges – some of which are outside our control.  The only thing we ever have complete control over is our mind.  Therefore, it is important for us to train our mind to be calm and cool no matter where we are.  The Dhammachai Dhutaṅga monks are living proofs that inner peace is possible anywhere, under any condition – cold rain or scorching sun - and it begins from within.  They can do it, and so can you.